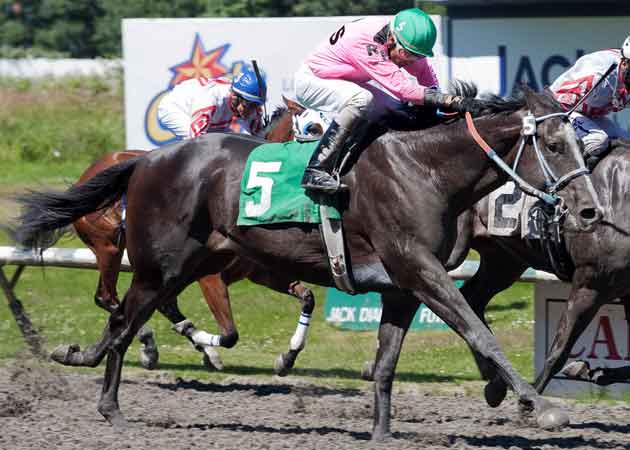 Vancouver, B.C. (June 24/17) – At the conclusion of last year Phil Hall ranked seventh overall in the final trainers standings at Hastings Racecourse. After 66 starts, he had made an honest but modest 17 trips to the winner’s circle.

Today, after just 17 race dates into the 2017 season, Hall has been part of 16 celebration photos.  Pretty simple mathematics: he’s already just one shy of his total wins of a year ago.

Hall was a double winner Saturday but the one that really mattered was A.P. Zona’s thriller over Driller in the $50,000 River Rock Casino Handicap in a 6 ½ furlong sprint for three-year-olds.

With Enrique Gonzalez in the irons, A.P. Zona left the sun-drenched matinee crowd in suspense when the photo sign went up with what appeared to the naked eye as having been a possible dead-heat involving A.P. Zona and Driller, ridden gallantly by Silvino Morales.

“It was a heart-stopper,” A.P. Zona owner Peter Redekop said later. “We had to sweat it out just like everybody else.”

It was A.P. Zona’s second stakes win of the season, having won the Jim Coleman Province in his first start for Hall on May 22. “It’s strange,” Hall said Saturday.  “He’s laid back and not aggressive in the mornings but shows up at race time.”

Live racing resumes at Hastings Racecourse Sunday at 1:50 p.m.  with the feature being the $50,000 Emerald Downs for three-year-old fillies.