DREAMS ARE MADE OF THIS

Something Vancouver Canucks head coach Willie Desjardins said the other day struck a chord about life behind the scenes at Hastings Racecourse.  Desjardins in his post-season address told a tribe of media merchants that they really don’t know and will never know what goes on in the Canucks dressing room.  He said, in effect: “We are a community within ourselves.  When all is said and done, we stick together like family.”

As competitive as things can get on the backstretch at Hastings in an industry where winning means survival, it is amazing and heart-warming to see how this “community within itself” remains unified and loyal.

On the same morning Desjardins was both defending and praising his athletes, Postmedia photographer Nick Procaylo was on assignment to capture what his editor referred to as “the many faces of the backstretch at a racetrack.”

With trainers, jockeys, gallop riders and muck-raking grooms coming and going in every direction; with ever-present clockers recording workout times for a constant parade of horses at track level and anxious owners perched on an elevated wooden platform surveying the non-stop action, it is your proverbial beehive of activity.

Yet as serious as this business is in preparation for a new live racing season that opens Sunday, April 17, those “many faces of the backstretch” are always willing to stop what they are doing to cooperate with the visiting photographer. Each and every one of them realizes and appreciates the value of publicity for their industry that has so few newspaper, television and radio mentions within Vancouver’s fast-paced sports landscape.

Reg Peat the blacksmith scurries off to get his apron at the request of the photographer; works yard boss Brad Dimond jogs through a small hill of mud to pose beside his tractor; Amanda Westenberg gives it her best girlish stance after galloping a pony for her boss and trainer Craig MacPherson, who’s bailing hay; former Queen’s Plate winning jockey Tak Inouye, owner/trainer Ken Walters, injured jockey Jeffery Burningham, trainers Dino Condilenios, Barb Heads, Steve Henson and Nancy Betts, former jockey and exercise rider Drew Levere and track announcer Dan Jukich … all of them treat the photographer like an old friend rather than an invader of their private turf.

They laugh and kibitz and trade good-natured verbal jabs.  They are a close-knit group that truly does reflect the many faces of the backstretch at a racetrack.

They are, it is safe to assume, Willie Desjardins’ kind of people.

Dreams Are Made of This … 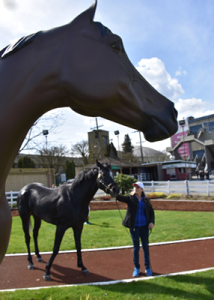 With a silhouetted statue of the great George Royal overlooking the scene, trainer Nancy Betts proudly shows off 4-year-old Merlot moments after having been claimed for $30,000 by the Hastings Racing Club in the 2016 Hastings Paddock Sale at Hastings Racecourse. George Royal, as a 4-year-old in 1965, was the first B.C.-bred horse to win Canadian Horse of the Year honors and was later inducted into the Canadian Horse Racing Hall of Fame and B.C. Horse Racing Hall of Fame. Merlot becomes the pride and joy of 200 investors who paid $250 each to become ‘owners’.

A sold-out Hastings Racing Club 1 resulted in the formation of a second Club, both under the direction of manager Richard Yates.  Nancy Betts was named trainer of Hastings Racing Club 2.  She will lead the latest merry band of owners who have invested $250 to watch their very own Shooting Jacket go to the post on opening day Sunday in the $50,000 Swift Thoroughbreds Inaugural Stakes, an allowance stakes for 3-year-olds & up.

Shooting Jacket, to be ridden by Ruben Lara on Sunday, has as his new stable mate 4-year-old Merlot, a $30,000 purchase by Hastings Racing Club 2 at the March 26 Hastings Paddock Sale.

The Swift Thoroughbreds Inaugural Stakes goes as the seventh race on the opening day card following the $50,000 Brighouse Belles, an allowance stakes for fillies and mares 3-years-old & up.

First race goes at 1:50 p.m. for Sunday’s eight-race card.   As always, there is no admission charge at Hastings Racecourse.