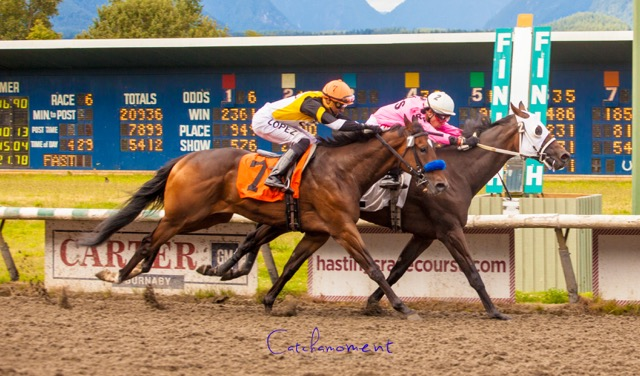 Breeder/owner Paul Caravetta wasn’t in the best of moods last Sunday after leaving the winner’s circle with the knowledge that his horse had been claimed following the sixth race at Hastings Racecourse.

Dashing Don, a California-bred 3-year-old gelding, had gone wire-to-wire in an allowance optional claimer for his second straight victory within the last two weeks.

“Losing a horse to a claim is all part of the business,” Caravetta said. “But this one stung a little more. He was something special.” Something special because Dashing Don had been named after Paul’s best friend and business partner Don Adams, who passed away on October 18, 2015.

Caravetta and Adams had worked together in the entertainment industry, both having been past presidents of the British Columbia Country Music Association working with young B.C. talent and helping to elevate them in their careers.“We did a lot of business through the week, and I would join Don at the track on weekends just to hang out with him,” Paul says. “One thing led to another, and we ended up owning horses together under D-21 Stables. D-21 was the table we always had reserved in Silks.”

Caravetta now runs his racing operation under JDP Holdings Ltd., the name of his 38-truck transport company that hauls general freight within the Lower Mainland. His racing partners at Hastings are Ross Rees and trainer Nancy Betts. “What I respect most about Nancy is that she rides the horses herself in the mornings and knows them,” Paul says. “I trust her judgment thoroughly.”

Caravetta, your typical east end Vancouverite who wears his heart on his sleeve, will get over losing Dashing Don in a claim. But he will never get over losing his cherished friend. “Whether I’m in the backstretch or in the winner’s circle,” Paul says, “Donnie will always be with me.”