A DAY TO REMEMBER & SHARE
FOR OWNER AND TRAINER SHAWN LAWSON 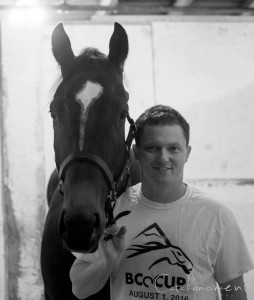 Shawn Lawson’s story is strictly movie material. When Shawn lost his mother at the age of five, his father became his best friend in the whole wide world and cared and protected him through unthinkable tough times.

Alex Lawson was a groom and hot walker who did odd jobs to make ends meet. He and Shawn, his only child, would sleep in barns and tack rooms. They literally lived at the track.
Shawn never completed his Grade 12 schooling at Delta Secondary in Ladner. His Dad had introduced him to the backstretch as a toddler and Shawn knew from those early years that horses and racing would lead him through his grown-up existence.

“My father died of a heart attack on a Friday the 13th in August of 2010,” Shawn, 26, says. “I was at Hastings, and he was working with the standardbreds at Fraser Downs (now Elements Casino). I got the call from a friend when I was in the barns working for Rob and Vicky Gilker. It was around 10 o’clock that night. Dad was in good shape. It came as a total shock.”

Shawn acknowledges today that his ‘racing family’ – particularly the Gilkers – pulled him through the hardest time of his life.

The name Shawn Lawson surfaced for the first time in the live racing program at Hastings under “owner” and “trainer” of a 3-year-old gelding named “One Time” on Monday, August 22.
Shawn had purchased “One Time” on a wing and prayer at the CTHS Yearling & Mixed Sale and lo and behold; “One Time” went gate-to-wire in his first career start.

Rob and Vicky Gilker were among a huge group of happy horse people from all levels of the industry as they stormed the winner’s circle to be with Shawn in his moment of glory.
“There were so many I couldn’t begin to keep count,” he said at the time, choking back tears along with his girlfriend and constant companion Brittany.

They had watched the race alone high up in the second tier of the Hastings grandstands along with one other person who was there in spirit. “I could feel Dad with me in the winner’s circle, too,” Shawn said. “I can’t remember being so happy.”